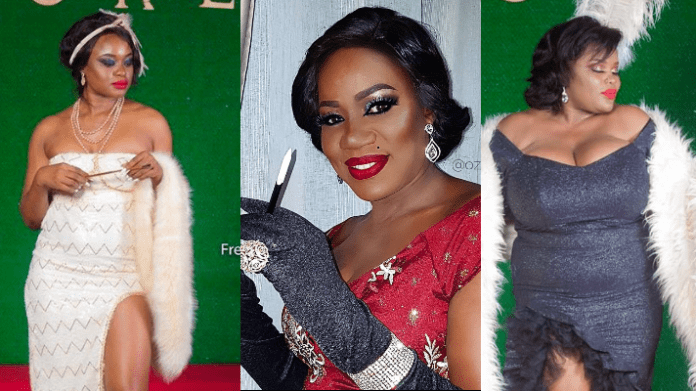 It’s time for keyboard warriors, fashion critics, entertainment stakeholders and Cameroon movie lovers to roll out the red carpet. Your favourite Cameroonian actors, designers, singers and entertainers have touched down in Douala for Syndy Emade’s Broken Movie Premiere. Given the Movie BROKEN, The Great Gatsby theme event will transport us back to the 1920s. The stars are ready to set the Douala Bercy Hall ablaze with their interpretation of 1920s Glamour.

Of course, The Great Gatsby theme’s set on social class, old money, new money, the elitism that runs throughout every stratum of society. After all, movie and fashion go hand in glove.

Because it takes two to tango, host, Nabil Fongod of Nabstar Radio and Vicky Fokala are tonight’s magnificent duo on the Great Gatsby red carpet. Fongod who has just dropped a new hit audio track WAHALA1 looks a million buck in a J.S Design. While Vicky stepped out in an elegant dress which the creative work of We Trend Ankara styled by Vicky Forkala.  Without a doubt, she looks stunning in the slit dress with ruffles and her hair, makeup and accessories are certainly Great Gatsby goals.

Actress Lucie Memba showed up in style to support Syndy at the preview of her movie Broken in Douala, Cameroon.

Like Lucie, Nsang Dilong, Elaine Achu, Jessyka Fon, Penjo Baba, Reneta Ndisang and many more were on the red carpet. Check out the gallery below and tell us who got the memo and who lost it.