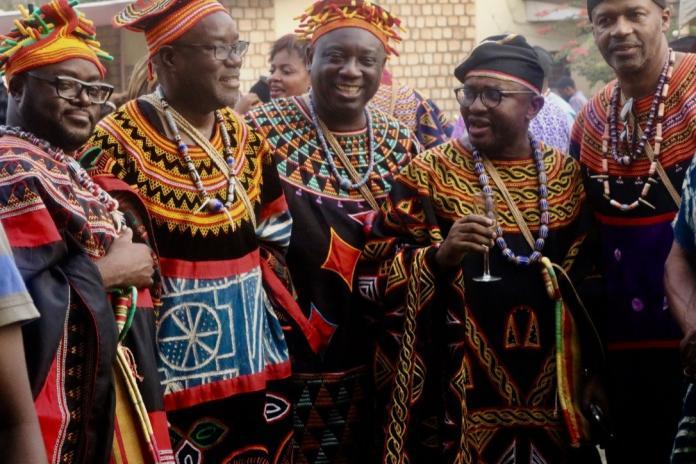 With Africa being one of the world’s second-largest continent, it is difficult to define the cultural wear of every single country and what they are called. However, we know that traditional African clothing is dictated to as much by the climate in which they live. Also, it is by the culture of the people just as like the Tugh. According to some findings, the population of Africa may have started wearing clothing around 180000 years ago. This is most likely due to an Ice Age that gripped the world. At that point, there was a need for the people to cover themselves for warmth.

The Tugh is a distinct traditional regalia worn by North Westerners (Graffis): men, women, and children. In the early ages, I mean stone age; by the early man. People wore leaves to cover their nakedness. During the migration era, the Tikaris tribe emerged from Fumban and migrated to the North West region of Cameroon. They settled in the North-West probably Nkambe and started descending down to Ndop, Kom, Bafut and so on.

Origin of the Tugh or Toghu Cultural Wear

Tugh was a cloth, tissue bought from Calabar and stitched in a particular style to suit the taste and culture of these people. Designed and sewn for both men and women and as well as children. Interesting, the fabric is called Ndep in Ndop particular the people of Bamessing. Again, the Toghu has a different name in every tribe that wears the traditional regalia

One of the first tailor prominent for the design of Tugh in Nkwen a village in Bamenda was Pa Logh at Mile 2 Nkwen. Some of the first people who wore Toghu in Nkwen were people like Pa Awambeng Nforngwen, his brother T Njem-Ncheh. Also, you had people like Ta Taniform Nkembah who worked in Nigeria especially in Calabar. Then the traders of tissues (wrappers) like Ta Azeh Kongo, Tah Nkwenti Taghem, Tangie James Mbawa amongst others.

Today, this regalia has been modernized by using different types of coloured thread and calico materials for a more contemporary taste; The fabric is usually handmade and also tailored. This is called marking. Today, the designs are numerous and prices differ according to its marking. Everywhere you can see Afugh-Kom Foundation producing and selling them. Samples of the earlier Tugh print pieces can be seen only in pictures which can be found in a palace library.

Feast Your Eyes on these Latest Awe-Inspiring Haute Toghu Gowns By...

Fri-Maikah Fon & Erico Ngwa’s Wedding was a Beautiful Celebration of...

This Toghu Inspired One-Shoulder Evening Gown by ShaSha Designs Is about...

Here Is How Celebrated Cameroon’s Fastest Rapper KO-C Is Using His Social Platforms To...

With Atoghu Accessories This Beautiful, Your Next Red-Carpet Outfit Should Be...