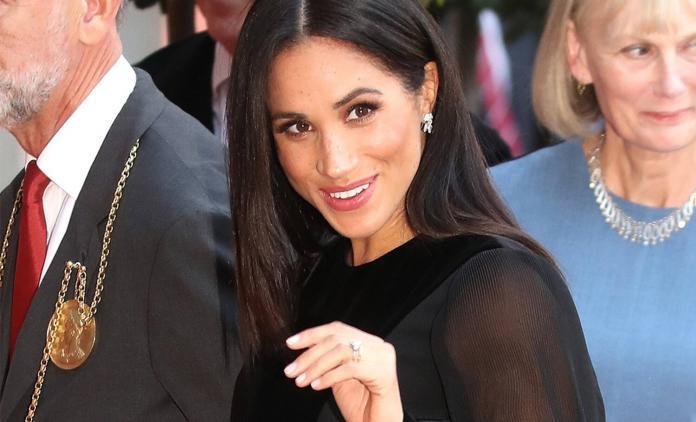 A black statement dress will forever remain in style. Meghan Markle proved that on Tuesday when she stepped out for her first ever solo outing as a royal. While spotting also her new straight hairstyle which she debuted earlier this week, the Duchess of Sussex stunned in a monochrome black look.  Arriving at the Royal Academy of Art in London for the opening of the “Oceania” exhibit, Meghan wore a black midi dress with velvet details, long, sheer sleeves, and a slit up the front by Givenchy.

Featuring a neckline with a plunging velvet detail to the waist in the shape of a V, the dress was a far cry from your regular black statement dress. Impeccably, the dress showcased her slim waist by accentuating it with a velvet belt with a gold clasp. Meanwhile, the sheer sleeves also featured velvet details at the cuffs. As always, Meghan’s face was fresh with very minimalistic makeup. She topped off the look with a Givenchy clutch to match her dress and her signature black pumps by Aquazzura.

Wearing a design by Givenchy seems to be parallel to being Meghan Markle. For her wedding to Prince Harry, the Duchess of Sussex stunned in a wedding gown designed by Givenchy Artistic Director Clare Waight Keller.

Now on to something intriguing. Have you noticed that the Duchess of Sussex seems to be a fan of black ensembles? While you ponder on that, did her outfit also give you some serious Princess Diana vibes? It sure did for me!

Remember Princess Diana’s iconic LBD that many called her “revenge dress?” In terms of style and occasion, you can’t compare Meghan’s demure formal dress to Diana’s gorgeous cocktail stunner. However, the use of velvet as a fabric of choice is very reminiscent of Diana’s breathtaking number. In fact, the placement of the velvet at Meghan’s neckline is similar to the sweetheart neckline of Lady Diana’s dress.

Maybe I’m pushing the envelope and your imagination too far here. However, I do see a connection between Meghan’s little black statement dress and Princess Diana’s “revenge” dress. Who knows, maybe its Meghan’s way of telling the media “you can’t break me.” After all, we all have been following the embarrassing drama reported by several news outlets about her paternal family. Without a doubt, in my estimation, this is an ode to Diana and an illustration of inner strength by Meghan! Way to go, Meghan. We are rooting for you Duchess of Sussex!

The Duke and Duchess of Sussex, Meghan Markle and Prince Harry Announce the Birth Of Their First Son

Could this be Meghan Markle’s sexiest look ever since becoming royal?

Catherine Duchess of Cambridge and Meghan Duchess of Sussex in the Royal Box at Wimbledon Tennis Championships, Day 12

Kate Middleton The Duchess of Cambridge Glams up The Royal Tour...