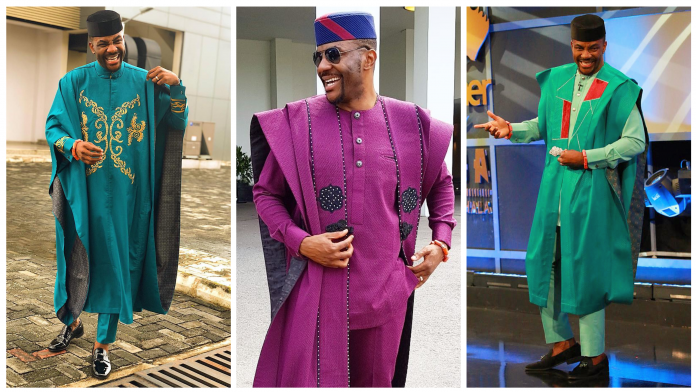 The Agbada trend has been gaining traction lately. Even ladies are beginning to rock the ancient old West African style. However, some people just know how to take this basic look to another level and that’s what Chukwuebuka Obi-Uchendu specializes in.

Ebuka is known as one of the most stylish Nigerian men on social media. The Nigerian Lawyer and television presenter became an internet sensation because of his love of stylish Agbada outfits for men. Ebuka’s agbada style first became a hit when he stole the show at Banky Wellington’s traditional wedding in 2017. Since then, his social media profile exploded. Mr. Ebuka continues to impress and wow us with his different interpretations of the agbada trend. We might very well just start calling him “Mr. Agbada”.

Let’s face it, it’s not just the agbada that we are impressed by. Definitely not! Come to think of it, the agbada trend did not start today. In fact, it is very predominant in most West African countries like Cameroon, Nigeria, Senegal, Ghana, Togo, Benin, Guinea etc. Especially among our Muslim brothers, the agbada is the norm. However, Ebuka’s styling choices when he dons an agbada outfit is what sets him apart. The guy just knows how to style the basic agbada look and bring it to life! He exudes this virility and sex appeal when wearing the agbada that will leave any woman breathless.

Accessories are a must for a stylish agbada look

Prominent among his styling choices is the use of accessories. If you look at all his agbada outfits, Ebuka always complements his look with some dapper shoes, cool coral beads around the wrist or neck and of course, an accompanying cap for each agbada outfit. Another thing to note is his love for color and the fact that he is not afraid to embrace color and style it appropriately! Honestly, I don’t know if it’s just his personality, his aura or his swag, but this guy just knows how to wear an agbada.