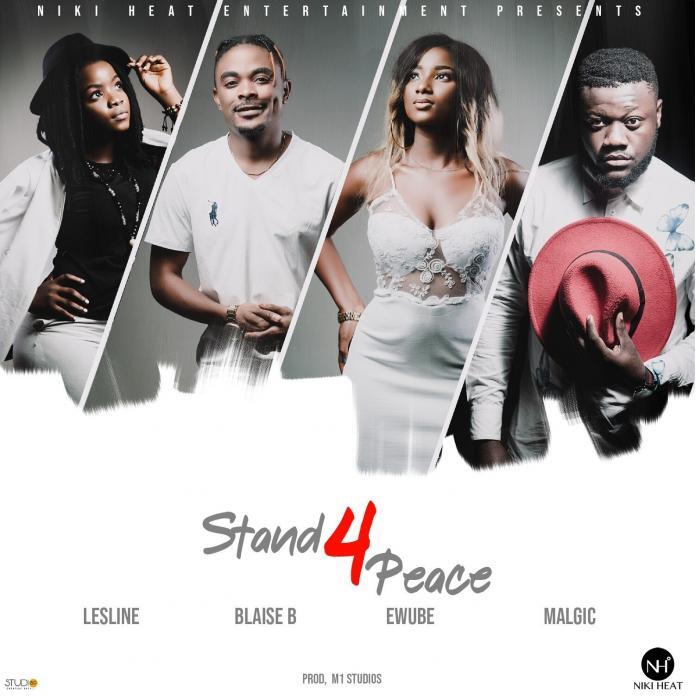 There is nothing more synonymous with peace than a music that unites the country. That is why four Cameroonian artistes have connected their voices to bring Cameroonians closer together. From a Press release issued by Niki Heat Entertainment, Lesline, Blaise B, Ewube and Malgic have collaborated in a single titled “Stand for Peace”

Not by chance, the release date coincides with the International Day of Peace which is celebrated each year on 21 September.

According to Barry S. Levy and Victor W. Sidel, Songs have the power to move people more than words alone. Songs can move people emotionally, socially, and politically. A great example is Pete Seeger, who died recently at the age of 94. He knew the power of singing to move people to help bring about progressive social change. A good example is “Where Have All the Flowers Gone” he sang calling for world peace.

Hopefully, when the official video drops, we hope the artists’ paints and an elaborate and vivid picture of the effect of war. Music like you all know, it not just for entertainment but rather a legitimate form of artistic expression

Even if you may have not shared the experience, hopefully, Stand for Peace by Ewube and the crew will help you share the emotions. We will all remember Cameroon in 2017 and 2018 for many reasons. When normal conversations fail music like this hopes to communicate the perfect feeling

The Official Audio will also be shared on Niki Heat Entertainment: YouTube Channel

For me, I hope to see how the song is going to shape the future of Cameroon.